The Federal Government and the Development of Aerospace Technology

Since 1903, the United States has spent hundreds of billions of dollars developing aerospace technology, on the management of the infrastructure necessary to support its operations, and on the military and other practical applications that it affords. Accordingly, through a century of heaver-than-air flight the federal government has been the major actor in developing and using air- and spacecraft.

The United States did not have to make that investment—it could have chosen to act like many other major nations such as China and Brazil and Turkey—but because it did the nation became the foremost air- and spacefaring power in the world. In truth, the impact of federal investments in aviation and space have been felt most directly in aerospace science and engineering, but it has also rippled through other fields of scientific and technological endeavor and across social, cultural, economic, and political arenas in the United States and worldwide. Apart from past theoretical developments in physics and the art and science of flight, federally supported R&D efforts have been a major factor—in some instances, the key factor—driving innovation.

The U.S. government’s investment in both aviation and space has supported activities performed by a wide range of parties, including both civilian and military federal agencies, nonprofit quasi-government entities, private corporations, and educational institutions. A number of important conclusions emerge from this discussion of federal aerospace investment. 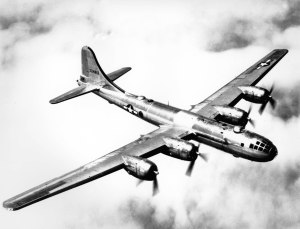 The B-29 built by Boeing during World War was a critical new technology that transformed post-war aviation.

First, for good or otherwise, critical innovation in both the space and aviation sectors has been driven by external crises. Both world wars, particularly World War II, had a motivating effect on aerospace engineering and mass production processes. Industrial techniques developed by Henry Ford for automobile production were applied to the war effort—Ford Motor Company mass-produced bomber and other aircraft in numbers unimaginable before the war.

Following World War II, the Cold War saw the development of intercontinental ballistic missiles that provided the technological foundation and legacy for space launch vehicles. This era also witnessed the development of advanced reconnaissance programs, such as the SR-71 aircraft and the CORONA satellite, to gather information about areas that were otherwise inaccessible. These activities led directly to many of the present space science efforts, such as Hubble Space Telescope, whose technologies and advanced engineering were based on these early intelligence programs. The launch of Sputnik and piloted Russian spacecraft and the outcry that followed so stung the U.S. that it was propelled to accelerate the U.S. human spaceflight programs to a vast scale and cost previously considered unacceptable by the public.

Second, the federal government’s role in fostering innovation appears to have followed different paths in aviation and space R&D. Specifically, in aviation, the government, from virtually the beginning, focused on supporting inquiry into basic principles of aerodynamics and materials, as well as creating facilities for conducting basic aviation science. This investment, in turn, helped the private aviation industry to progress from a small-scale, essentially craft-centered, node of development and production to the vast, mass-production enterprise it has become today, with its own flourishing R&D component.

By contrast, the federal government’s role in fostering R&D in space innovation often appears to have reversed the typical progression from basic research to development. Instead, federal investment in space innovation concentrated on technology development and engineering, with little emphasis on basic research. By the time the U.S. space program began scaling up to produce spacecraft in the 1950s, the basic principles of rocketry and space flight were already well understood. The practical problems of launching viable spacecraft, however, were not. In turn, spaceflight facilitated deployment of new scientific instrumentation and the conduct of new experiments that fueled advances in basic science.

A control center with imagery delivered by air and space assets.

Third, the cross-fertilization between national security (defined as the military and intelligence communities) and civilian innovation has been central to the success of both the aviation and space enterprises. Because the military and civilian industrial bases in both sectors overlap substantially and many technologies are “dual use,” U.S. national security and civilian programs have often benefited from innovations emerging from the other domain or from joint efforts. Yet, different organizational missions have also led to differing institutional focus and emphasis: for the NACA and NASA, on basic aviation and space science and R&D; for the national security community, including the military Services, more often applied research and development of advanced weapon systems.

While development of a particular technology by one agency may not have led to the direct production of an operational system by another agency and thus could be construed as a failure of innovation, in other instances that technology development led to unanticipated breakthroughs in other technologies or system approaches that could be applied across organizational and institutional boundaries. Applying performance measures to pure research has not always worked, yet many would argue that taxpayer dollars for focused federal investment in aerospace R&D should provide a worthwhile return on investment. Nevertheless, opportunities for cross-fertilization between federal organizations, driven by decreasing federal investments in aerospace R&D and other factors, are having the effect of encouraging greater numbers of joint or interagency activities to pursue dual use technologies.

Fourth, the evolution of large-scale engineering techniques and methodologies has yielded important lessons for similar-scale projects in other areas. These accumulated lessons have enduring relevance—from the days of NACA and large-scale wind tunnels for testing aircraft to the large scale engineering projects involved in human spaceflight. From the Mercury, Gemini, and Apollo programs to the space shuttle and international space station and the exploration of the Moon and Mars, they continue to guide and inform.

The results of those earlier investments in aerospace technology are everywhere around us. It was in no small measure from government investment in miniature electronics technologies in the 1960s and 1970s that the many devices we use today, such as today’s Smartphones, sprang. It is from government investment in computing and telecommunications technology that the Internet emerged. It was from government R&D that our space-based system of navigation—the Global Positioning System, or GPS — has made reading a paper map obsolete. These are only a few examples among thousands.

One can clearly speculate where the future of flight may go, but whatever the course success will still hinge on the investments in aerospace technology made today, so that in the future American capabilities may be built on firm foundations.