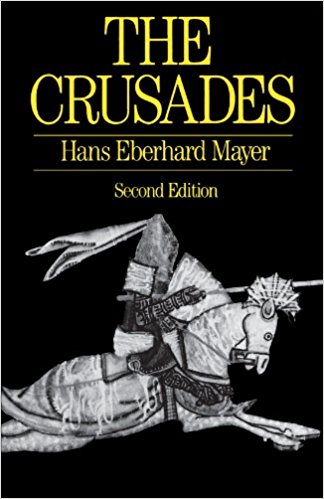 My interest in the Crusades goes back decades, and I have read several books on the subject. Although dated, this one is a strong overview of the subject, and makes a fine introduction to the subject.

Hans Eberhard Mayer was professor of Medieval and Modern History at the University of Kiel at the time of writing. He had a broad knowledge of this subject. He narrates the story clearly, even though the translation des lead to long sentence and paragraph constructions endemic to German scholarly writing. Many readers of the English version will find themselves lost part of the time. Pay attention, he has much to say and he will eventually get around to saying it.

The books begins with the official declaration of Pope Urban II in 1096 for the departure of Christians from Europe to “free” Jerusalem and Palestine from Muslim rule. Mayer notes that participation satisfied a range of feudal obligations and many a knight responded as much for economic and political gain as for religious virtue. There had, of course, been earlier calls for action against Islamists, but this one was different. It had strong support from various kingdoms and rulers who saw an opportunity to burnish reputations and eternal glory as well divert internal tensions to an outside enemy. It had a capable “sales force” that journeyed around Europe drumming up support. It also had support from Byzantium, whose emperor realized that this help would be needed to maintain his empire’s hegemony in Eastern Europe. Thousands of crusaders, only some of whom were effective from a military perspective, answered the call and traveled to the Middle East.

The First Crusade (1096–1099) achieved the most measurable results of all the separate invasions, as well as unleashed a fair measure of overreach, a torrent of violence and extremism, and a level of barbarism not often seen in Western Civilization. It also resulted in the creation of several Crusader states in the Middle East, including the Kingdom of Jerusalem. Additional Crusades continued in the 12th through the 15th centuries. These efforts transformed both the Middle East and Western Europe. Mayer makes this clear in his conclusion.

The broad historical perception that this was one of the most negative eruptions of bigotry and violence ever perpetuated on other inhabitants of Eurasia is overblown, according to Madden. Certainly, there were excesses and negatives, but most of the people engaged in the Crusades did so for piety, charity, and devotion. Most did not engage in atrocities. That is not to minimize the evil committed in the name of Christendom, but it does cast this in a somewhat broader context than previously.

Mayer emphasizes how the establishment of Crusader states in the Middle East served directly to transform many aspects of Medieval life. First, Christians ruled in the region for some two centuries and that beachhead brought closer together than ever before the cultures of two dynamically alternative lifestyles. This interchange proved critical to the development of both cultures and religions. Second, the Crusades also assured the integrity of Byzantium, thereby buttressing Christendom in Eastern Europe until the fall of Constantinople in 1453.

Finally, Europe emerged from the Crusading experience energized for further expansion; in that case to the Americas and Asia. At a fundamental level, the Conquistadores from Spain that overran the Aztecs and the Incas were Crusaders every bit as much as those who captured Jerusalem in 1099. One could question if these are positive developments. The path from Crusades to the Middle East, the creation of bulwark against Islamic expansionism, and the establishment of European imperial entities in other parts of the world is not direct, but is certainly present.