Slaveholders Came in All Shapes, Creeds, and Religions: A Short Biography of Judah P. Benjamin

With all of the news of late about the white nationalists in Charlottesville and Confederate statues I though it appropriate to remind others of the life of Judah P. Benjamin (1811-1884). I have been interested in him since I was an undergraduate history student; in the fall of 1974 I was an intern at the Historical New Orleans Collection in the French Quarter of New Orleans. They had a small collection of Judah Benjamin materials and I was asked to work on its processing. While doing this work I grew interested in his life and career. Here are a few facts that I learned about him.

Born on the island of St. Croix, British West Indies,  on August 6, 1811, Benjamin came to the United States as a young child. He grew up in the American southeast, and was educated broadly, especially at Yale University. As a Sephardic Jew he faced religious bigotry so much a part of American society, both then and now. As a slaveholder, Benjamin accepted the racist status quo in the American South.

During the course of his life Benjamin had three successful careers in various governments. First, he became one of the most successful lawyers in the United States, operating in the antebellum era out of New Orleans. Second, was an outstanding politician before and during the Civil War. There he became a wealthy slaveowner and served in both houses of the Louisiana legislature prior to his election to the Senate in 1852. Always, he was an eloquent defender of the institution of slavery, making at one point or another its defense on practical, ethnic, and religious grounds.

Third, he served a Senator from Louisiana between 1853 and 1861, and when his state seceded in 1861 he resigned his seat and embraced the Confederate States of America as a legitimate entity. In so doing he committed treason against the United States of America. Sometimes referred to as the “Brains of the Confederacy” Benjamin served successively as the Attorney General, Secretary of War, and Secretary of State for the Confederacy. In all positions he was remarkably effective. Some have thought his capabilities in support of the Confederacy helped to extend the war by at least a year beyond what would have normally been the case otherwise.

Unable to accept defeat in 1865, after the war Benjamin went to England, living in Europe as an ex-patriot the remainder of his life. He began a new career as a barrister in London, where he was also exceptionally successful. Benjamin retired to Paris in 1883, where his wife had lived apart from him for many years, and died there on May 6, 1884.

Not your average Confederate, no doubt, but one that embraced a lifestyle of leisure built on the backs of slaves despite his Jewish heritage and practice of his religion his entire life, which itself placed him in second-class status in America. One might think he would have seen the disjunctiveness of these two positions, but apparently he never did. The lack of sympathy of one persecuted minority for another persecuted minority is appalling. Of course, so was the whole institution of slavery and all it wrought. 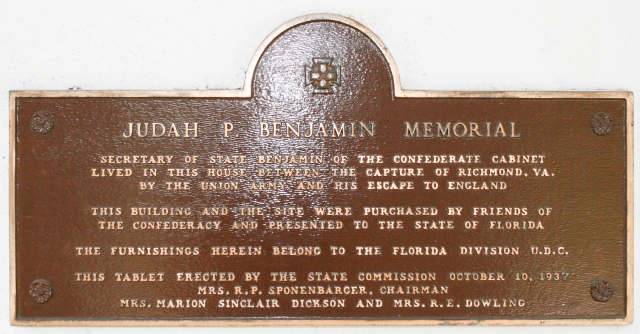 The only monument to Judah P. Benjamin, a memorial plaque at the Gamble Plantation Historic State Park, Ellenton, Florida.

4 Responses to Slaveholders Came in All Shapes, Creeds, and Religions: A Short Biography of Judah P. Benjamin