44 Years Ago Today: Apollo 8’s Historic Broadcast from the Moon on Christmas Eve in 1968 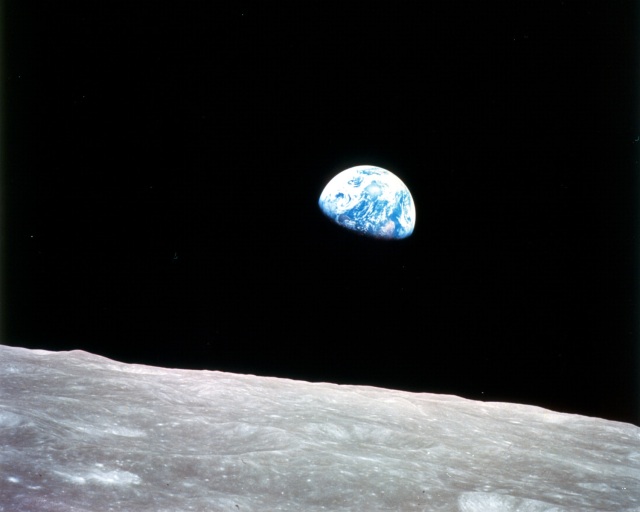 “Earthrise,” one of the most powerful and iconic images from the Apollo program, was taken in December 1968 during the Apollo 8 mission. This view of the rising Earth greeted the Apollo 8 astronauts as they came from behind the Moon after the first lunar orbit. Used as a symbol of the planet’s fragility, it juxtaposes the grey, lifeless Moon in the foreground with the blue and white Earth teeming with life hanging in the blackness of space.

Hard to believe, it was 44 years ago today that the crew of Apollo 8 made their historic broadcast from the Moon on Christmas Eve in 1968. Launched on December 21, 1968, astronauts Frank Borman, James A. Lovell, Jr., and William A. Anders became the first human beings to venture beyond low Earth orbit and visit another world. The Apollo 8 crew rode inside the command module, with no lunar lander attached. They were the first astronauts to be launched by the Saturn V, which had flown only twice before.

As Apollo 8 traveled outward the crew focused a portable television camera on Earth and for the first time humanity saw its home from afar, a tiny, lovely, and fragile “blue marble” hanging in the blackness of space. When it arrived at the Moon on Christmas Eve and for the next twenty hours the astronauts circled the Moon, which appeared out their windows as a gray, battered wasteland.

The crew’s Christmas Eve broadcast in the midst of a tumultuous 1968—the Tet Offensive in Vietnam, the assassinations of Dr. Martin Luther King and Robert Kennedy, race riots in virtually every major city, anti-war rallies and confrontations—helped to bring together if only for a brief time the disparate thread of the nation. The crew read from the first part of the Bible—”God created the heavens and the Earth, and the Earth was without form and void”—before sending Christmas greetings to humanity.

On Christmas day the Apollo 8 crew fired their rocket boosters for a return flight and safely “splashed down” in the Pacific Ocean on December 27, 1968. The mission had proven the ability to navigate to and from the Moon, but more importantly it gave a tremendous boost to the entire Apollo program and fostered the aura of success that permeated NASA. Upon return to Earth, Apollo 8 commander Frank Borman received a telegram from with the facile observation, “Thanks, you saved 1968.” Here is the Christmas Eve broadcast.

8 Responses to 44 Years Ago Today: Apollo 8’s Historic Broadcast from the Moon on Christmas Eve in 1968