The Antarctic and Outer Space Treaties after the Cold War: Are They Still Valid? 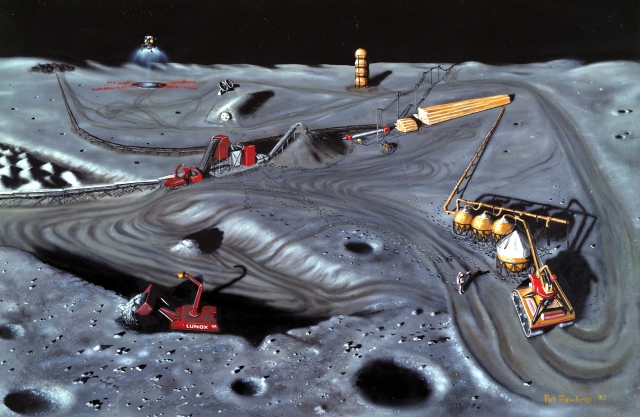 Artist’s conception of lunar mining, after 2020, artwork by Pat Rawlings. Many believe that the resource rich Moon may one day sustain human efforts to remain in space indefinitely.

The two separate treaty regimes—The Antarctic Treaty of 1960 and the Outer Space Treaty of 1967—worked relatively well in the context of the Cold War environment between World War II and about 1990. The sudden collapse of the Soviet Union, however, changed the dynamics of geopolitics and brought changes in the manner in which the nations of the world have dealt with both Antarctica and outer space. Both treaty regimes have clear statements about prohibitions, guidelines, and objectives that served well for many years, but their place in a non-Cold War era has eroded.

Overall the evolution of policies and law governing these regions has reflected the influence of the science community on the political leadership in concert with geopolitical motivations, replacing what analyst U.M. Bohlmann called “the early hard power arguments to the quest for scientific knowledge perceived as a cultural imperative.”

In the last twenty-five plus years a series of new pressures have arisen. At a fundamental level the IGY, the problem of Antarctica, “freedom of space,” and Sputnik were interrelated and handled in an essentially similar manner. All actions were largely predicated on the belief that nothing of intrinsic value is present either in Antarctica or in space.

However, both major legal structures—the “freedom of space” doctrine ensconced in the Outer Space Treaty and the Antarctic Treaty—were fragile instruments at present and under assault from several quarters, especially military and economic interests. In both cases, a question: what would happen should something of worth be found in Antarctica or in space?

While the communities overseeing these regions continue to protect and sustain science exploration and discovery through existing treaties and policies, it is obvious that in the future efforts to allow appropriate technological development and expansion of human activities must take place.

For example, since near the turn of the new millennium a consistent drumbeat has been raised by private citizens and some groups to overturn the prohibition against property rights of celestial bodies. They insist that the Outer Space Treaty has been the fundamental disincentive to exploit space bodies. Indeed, in an environment in which outer space is considered a “province” owned by all, as argued by Lawrence D. Roberts, there is no guarantee that any private sector investment in resource exploration and exploitation would be allowed.

Indeed, much of this was an academic debate until 2010 when the Google Lunar X Prize offered a $20 million purse to the first team to land a rover on the Moon; with an added $5 million if the team could image a lunar landing site. More than five teams are actively working toward undertaking this mission. That monetary reward might be the first serious step toward overturning the property rights issues of the Outer Space Treaty, since whoever takes the prize will seek to exploit the Moon’s surface and the objects placed there by the U.S. and the Soviet Union in the Cold War.

This may also jump start a return to the Moon for the extraction of resources, especially if there is a discovery of something of value that might be be readily exploited. Regardless, there are many in the space community who believe that many provisions of the Outer Space Treaty has outlived its usefulness.

4 Responses to The Antarctic and Outer Space Treaties after the Cold War: Are They Still Valid?