In 1976 the expansion Kansas City Royals were in the midst of taking their first American League West division title, with a record of 90 wins and 72 losses, but just as important was the race for the American League batting title between Royals third baseman George Brett and designated hitter Hal McRae.

Officially, Brett won the title with a .333 average and McRae was a close second at .332. Who actually should have received the batting title has been a source of debate ever since the season’s end. Many who saw the last game, and some who were part of it, still don’t know what happened. Some said it was fixed. Some said there were racial implications. “To this day, I don’t think anybody knows the truth,” said Dean Vogelaar, who in 1976 was the Royals public-relations director.

This batting title not only came down to the last game but also to the last inning of the season. And all the contenders were on the same field. The Twins came to Kansas City for a season-ending, three-game series, and it was clear that someone in Royals Stadium would emerge with a batting title. Kansas City’s McRae and Brett and Minnesota’s Rod Carew and Lyman Bostock were one-two-three-four in the batting race. Bostock soon went out of the running when he hurt his thumb in the series opener and missed the last two games, finishing at .323. Carew, who was in the race until midway through the last game of the season, went two for four and finished at .331.

Going into the last game McRae led Brett by .00005. The Royals had already clinched their first division title so that pressure was off on that score. Under normal circumstances Royals manager Whitey Herzog would probably have given his regulars an off day to prepare for the League Championship Series. But Brett and McRae had to play to resolve the batting championship. Both went two for three heading into the bottom of the ninth inning, when both were scheduled to bat again.

Officially McRae’s batting average stood at .33269, and Brett was at .33229. Brett needed a hit to surpass McRae, and of course McRae only needed a hit to ice the title. Brett lofted a routine fly ball to the outfield, and Twins left fielder Steve Brye should have caught it easily. He was playing unusually deep, however, and he broke in the wrong direction. By the time he recovered, the ball had landed about ten feet in front of him and then bounced over his head to the left field wall. Brett circled the bases for an inside-the-park home run and finished the day three for four. Brett said after the game that Brye’s play surprised him. “I swear,” Brett commented, “he just stopped and let it bounce in front of him.” No one was more excited by this than McRae, who greeted Brett at home plate with a big smile and a high five. McRae knew that he could still take the batting crown, but it would require a clean hit. Unfortunately, he grounded out to the shortstop.

While happy for his teammate, McRae believed that the Twins had conspired to let Brett win the batting title. He thought that Twins Manager Gene Mauch had ordered Brye to misplay Brett’s fly ball. He explicitly cited racism as the reason for Mauch’s action and said, “This is America, and not that much has changed. Too bad in 1976 things are still like that.” Because of this belief, as he walked back to the Royals dugout McRae doffed his batting helmet to a standing ovation by the Royals faithful, and then he turned and expressed his feelings by displaying the middle digit of his hand to the Twins dugout. Gene Mauch was incensed and charged the field, whereupon both benches emptied and it took a few minutes for the umpires to restore order. 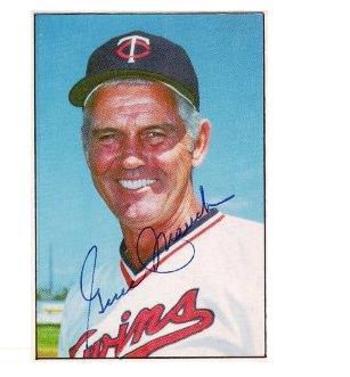 Steve Brye has resolutely maintained that he misplayed the ball and did not let it drop intentionally. So has Mauch, who was clearly shaken by McRae’s allegation of racism. “This thing hurts me more than anything that has ever happened in my thirty-five years in baseball,” Mauch said after the game. Perhaps Mauch did not rig the batting championship in 1976. Perhaps he did. No one will ever know, but I doubt it. Regardless, Hal McRae was right about the racism present in American society in 1976, just as he would also be right to condemn racism in American society in 2012.

A critical problem for the Royals was whether or not the outcome of that last game would fester and destroy the camaraderie between Brett and McRae as the team headed into the playoffs against the New York Yankees. Apparently, it did not have too many ramifications. The next day the other members of the Royals saw Brett and McRae in the dugout during practice talking and joking about the turn of events. McRae has insisted that whether or not Mauch told Brye to misplay the ball, that regardless racism was ever present in American society. He is certainly right about that, and recent racist outbursts are apparent around the nation even now. McRae also insisted that the incident should not diminish the accomplishments of George Brett, who won the first of his three batting titles in his career. “One of them was won over a teammate in circumstances that could have torn apart their relationship,” recalled McRae, “but it didn’t.” For his part, Brett said, “Hal and I were great friends prior to that. I think, that day, he felt cheated. I think after that day, he was fine with it.”